In this post, I’ll talk about a CodeQL query for detecting JEXL Expression Language injection vulnerabilities. First, I’ll give a brief overview of expression languages in general and JEXL in particular. Next, I’ll explain what Expression Language injection is and how to prevent it. Then, I’ll describe how the CodeQL query works. In addition, I’ll show a couple of vulnerabilities that have been found by the query. 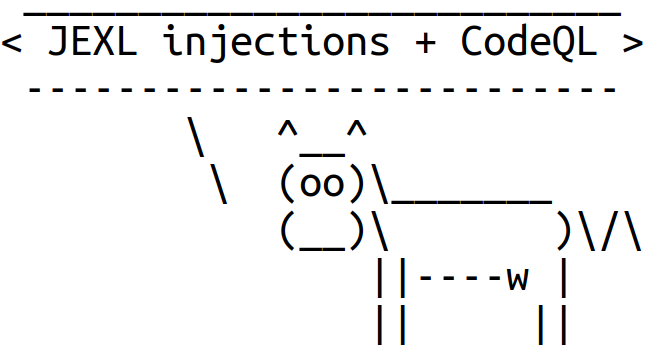 What is Expression Language?

Expression Language (EL) is a general-purpose programming language mostly used for embedding and evaluating expressions at runtime. Most often, they are interpreted languages. In other words, there is an interpreter that prepares an execution context and runs an expression in it. Depending on a particular application, expressions can be created by developers, admins or even regular users for various purposes. Embedded expressions often help customize and configure an application.

There are multiple implementations of EL. Here are several examples:

Normally, Expression Languages offer many simple operations such as addition, multiplication, string concatenation and so on. Besides that, some EL interpreters allow calling methods on objects that are available in the evaluation context. Furthermore, some interpreters allow accessing any class in the JVM and calling their methods. But that may be quite dangerous.

JEXL stands for Java Expression Language. It is a library that offers API for evaluating JEXL expressions. The project belongs to Apache Software Foundation.

The most interesting fact for us is that JEXL is powerful enough to let us calling classes and methods that are available in the JVM. The following code calls ProcessBuilder to start an external process:

What is Expression Language injection?

If an application allows expressions to access classes and methods available in the JVM, and if a malicious user can feed (or inject to) the application an arbitrary expression, it often leads to arbitrary code execution. That’s called Expression Language Injection vulnerability. The impact of this type of issue is usually high because the attacker can run almost any code inside or even outside the JVM. The likelihood of a successful attack depends on the way how the attacker can inject a malicious expression. In the worst case, an application reads and runs an expression from a request that is received from an unauthenticated remote user, for example, using HTTP. That usually results in Remote Code Execution (RCE). Besides that, applications can get expressions from files, databases, and other places.

Here is an example of vulnerable code. It just takes an expression from an HTTP request and immediately runs it:

First of all, I’d recommend thinking twice before introducing expressions in an application. It may happen that they are not really necessary, and there is a better (simpler?) design. If introducing expressions is unavoidable, expressions should run in a restrictive sandbox. Fortunately, JEXL offers two ways for implementing a sandbox. The first way is to use the JexlSandbox class. The class lets specifying which classes are allowed or prohibited to call from a JEXL expression. Make sure that you pass false to the constructor. It means that all method calls are prohibited unless they are explicitly allowed. Here is an example:

The second way is to create a custom sandbox by implementing the JexlUberspect interface. The main purpose of this class is introspection, but it may be used for creating sandboxes as well. This way is more flexible because we are not limited by the APIs offered by JexlSandbox. Here is an example:

CodeQL is a code analysis engine. It lets you write queries for your code to detect various issues including security ones. Let’s see how it can help us detect JEXL injections.

CodeQL can look for data flows from sources to sinks that we specify. In the case of JEXL injections, the sinks are method calls that trigger evaluating JEXL expressions such as JexlExpression.evaluate(), JexlScript.execute() and several others. The most interesting data sources are the ones that are available for remote users. For example, network sockets and HTTP requests. A data flow from a remote source to one of the JEXL sinks may be a potential JEXL injection. I’ve implemented this idea in a CodeQL query. Let’s have a look at its main components.

To search for data flows, I wrote a config for tracking tainted data from remote data sources to JEXL sinks. Here is what it looks like:

It has three main parts:

Let’s have a closer look at JexlEvaluationSink:

It defines two groups of method invocations that can trigger evaluation of JEXL expressions:

Finally, the query checks whether a sandboxed JEXL engine is used or not. It is implemented in the isUnsafeEngine() predicate and a separate data flow config SandboxedJexlFlowConfig that checks whether JexlSandbox or JexlUberspect have been set for the JEXL engine.

There are a couple of known issues with the current query:

The query found a couple of interesting issues.

The first finding is an RCE in OpenNMS/newts project (CVE-2021-3396). The server offers /measurements/{resource} endpoint:

The endpoint accepts POST requests with a number of parameters. Most of them come from the URL path and query string. Besides them, the method
getMeasurements() accepts an instance of ResultDescriptorDTO. This parameter doesn’t have any annotation, but it comes from a body of
the POST request. The ResultDescriptorDTO class holds an array of JEXL
expressions. When the endpoint is invoked, those JEXL
expressions go to a JexlEngine and get executed immediately. The engine is not configured with a sandbox. As a result, a remote user can run arbitrary code on the server. The issue has been fixed in newts 1.5.3 by sandboxing JEXL expressions.

The second finding is an RCE in Traccar project. The server has an undocumented endpoint
/attributes/computed/test that accepts a device id and a structure with an attribute:

The attribute has an expression field that contains a JEXL expression. The expression goes directly to a JexlEngine that doesn’t use a sandbox. This issue may be difficult to exploit because an attacker must be an admin to access the endpoint. Therefore, the project maintainers don’t treat the issue as a serious one.

The query can be extended to consider more data sources such as files. That would definitely found more issues. However, such issues are not that interesting because it is much more difficult for an attacker to take advantage of them. For example, Apache JMeter doesn’t sandbox JEXL expressions that come from a test plan. Implementing a sandbox is considered a security enhancement.