In this blog post, I’ll talk about detecting unsafe Spring Exporters with a CodeQL query. First, I’ll describe the issue that received CVE-2016-1000027. Next, I’ll show what a vulnerable code looks like and how the issue can be mitigated in an application. Then, I’ll describe how the CodeQL query works. In addition, I’ll show a couple of vulnerabilities that have been found by the query. 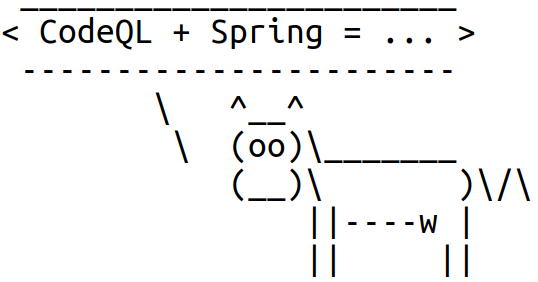 What is a Spring Exporter?

The Spring Framework provides classes for exporting a service bean as an endpoint. Service exporters read data from an incoming request and then pass the data to the underlying bean. The data can contain a serialized object.

The default Java deserialization mechanism is available via ObjectInputStream class. This mechanism is known to be vulnerable. If an attacker can make an application deserialize malicious data, it may result in arbitrary code execution in the worst case.

The issue was discovered and reported by Tenable. The problem received CVE-2016-1000027. The Spring team deprecated the vulnerable classes and added a note to the documentation that warns users about the issue. They recommended to avoid using the dangerous exporters.

To be honest, it doesn’t seem possible to fix the issue without breaking applications that use the vulnerable exporters. The usual fix for such issues is to check if a serialized object is an instance of an allowed class before deserializing it. This can be done by overriding ObjectInputStream.resolveClass() method or by using ValidatingObjectInputStream from Apache Commons IO. The key thing here is the default list of allowed classes. If the default list is restrictive, the fix is likely to break applications. If the list is permissive, then the applications are still vulnerable by default, and the users need to explicitly specify the allowed safe classes to get rid of the vulnerability. The Spring team decided not to offer a way for configuring allowed classes for deserializing in the vulnerable exporters.

It is quite easy to make an application vulnerable by using one of the unsafe service exporters. The following example shows a vulnerable HTTP endpoint that is based on HttpInvokerServiceExporter:

The next example shows how the same endpoint can be defined in an XML config for the Spring Framework:

For demo purposes, I also wrote a simple PoC for CVE-2016-1000027. This is a simple Spring application that uses a vulnerable service exporter. The repository contains a demo exploit for the vulnerable endpoint.

The best way is to stop using HttpInvokerServiceExporter and SimpleHttpInvokerServiceExporter or any other exporter that is based on RemoteInvocationSerializingExporter. Instead, one of the other message formats for API endpoints can be used. For example, JSON. Make sure that the underlying deserialization mechanism is properly configured so that deserialization attacks are not possible.

If the vulnerable exporters can not be replaced, consider using global deserialization filters introduced in JEP 290.

CodeQL is a code analysis engine. It lets you write queries for your code to detect various issues including security ones. Let’s see how it can help us detect unsafe Spring service exporters.

As shown in the code snippets above, an unsafe service exporter may be defined in two ways:

CodeQL can cover both ways. That’s exactly what we need.

In a Spring configuration class, we need to look for the following methods:

The below CodeQL query implements these ideas:

In an XML configuration, we just need to look for <bean> elements that use a class that extends RemoteInvocationSerializingExporter in the class property. The following simple CodeQL query implements this:

If a security scanner reports CVE-2016-1000027 against your application, you can use the above CodeQL queries to check if the application is really vulnerable. These queries have been also added to the CodeQL experimental query pack.