Recently WhiteSource security scanner started reporting WS-2016-7107 against Spring-based applications. This is an old issue in Spring Security that was reported in 2016. Unfortunately, at the moment of writing it, the issue has not been fixed yet. But there is a pull request that should address it. The problem is that CSRF tokens generated by Spring Security are vulnerable to the BREACH attack. The attack is even older – it was published in 2013. The BREACH attack is similar to the CRIME attack but BREACH doesn’t need TLS compression. 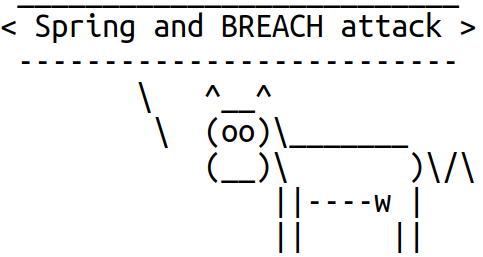 There are several conditions for a successful attack:

TLS configuration doesn’t matter. In the case of a Spring-based application, a successful attack allows the attacker to recover the victim’s CSRF tokens. That’s what WS-2016-7107 is about.

The issue seems to get quite a lot of attention because WhiteSource reports it against almost all applications that use Spring Framework. Look at the number of linked WhiteSource reports in the original issue on GitHub. And that’s only projects on GitHub that use WhiteSource. What makes it worse is that the issue is still open. Therefore, it is not possible to fix this issue in an application just by bumping the version of Spring Security. Furthermore, if the proposed fix is accepted, it will be likely released only in the next major update of Spring Security because the fix updates the public API.

Here is how you can do it with curl:

If HTTP compression has to be on, there may be another option. The application can implement a custom CsrfTokenRepository that applies the unreleased fix for Spring Security. I have not tested this option though.

Let’s hope the issue will be fixed soon in Spring Security.