If you think that your STM32 board feels lonely, you can connect it to your laptop. One of the ways how you can do that is USART. That’s probably the easiest way. For example, let’s say that we want to send text commands from a laptop to STM32 board. One command should turn on an LED, and another one should turn it off. And of course, STM32 should curse us in case of invalid command. 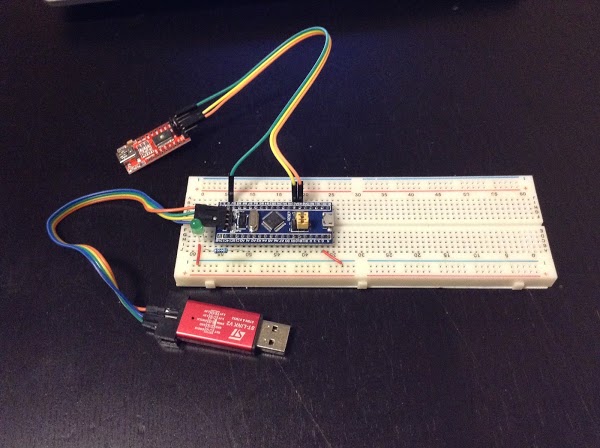 I used a template project for STM32 which I have described earlier. Everything that I described in that post applies here (same components, same software, same commands). But source code became a little bit more complicated:

As I described in my previous post, I connected an LED to PA1 pin. Then, we need to connect an USB-Serial adapter to STM32. According to datasheet for STM32F103, PA9 and PA10 pins can be configured for USART (see page #31 of the datasheet):

I hope your laptop has two free USB ports because we need one for ST-LINK/V2, and another one for USB-Serial adapter.

That’s it about hardware.

I put the sources on GitHub:

The structure is similar to what I described in my post about template project for SMT32:

Here is what we have in main.c:

The sources can be compiled and uploaded to STM32 board with commands like the following (you need to specify a path to STM32 standard peripheral library):

If you use Linux, there should be a file in /dev associated with a USB port which you use for USB-Serial adapter. You can use dmesg tool to find it:

After that you can send data to STM32 by writing to this file, for example:

Or, you can use your favorite terminal emulation program, for example, Minicon:

The second command above shows a menu where you can configure minicom with proper settings for USB-Serial connection (file name, baud rate, word length, stop bits, parity and flow control). You can find those settings in usart_init() function. Then, it will offer you to save settings, and connect to the device). Or, you can just use the following command:

That’s pretty much it. Good luck! 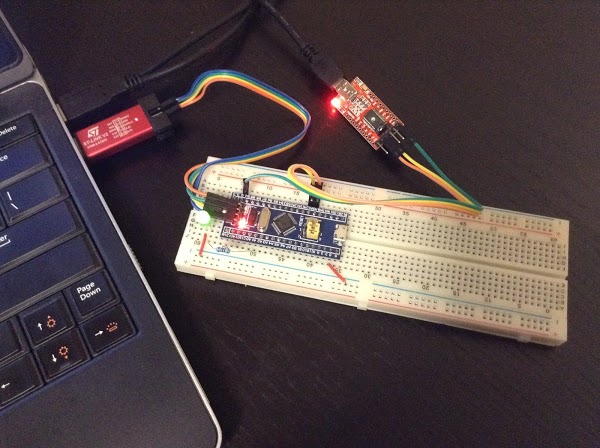