When you play with new microcontroller, first thing you usually do is driving an LED. That’s a classic “Hello World!” project for microcontrollers. That’s what I did when I was playing first time with ESP8266 and MicroPython. Let’s move on, and implement another classic project - measuring temperature and humidity with DHT22 sensor. But we don’t want to be quiet, so we are going to share this so important data on the Internet. ThingSpeak will help us with it. Let’s add a new warrior to the army of Internet of Shit!

This project is based on my previous post - Getting started with ESP8266 and MicroPython. So, everything what I described there apply here.

Also note that it may be better to use ESP8266 which has more than 512K of flash. It looks like that limited versions of MicroPython may not work well (see Problems with running MicroPython on ESP8266 with 512K).

Here is the circuit I used: 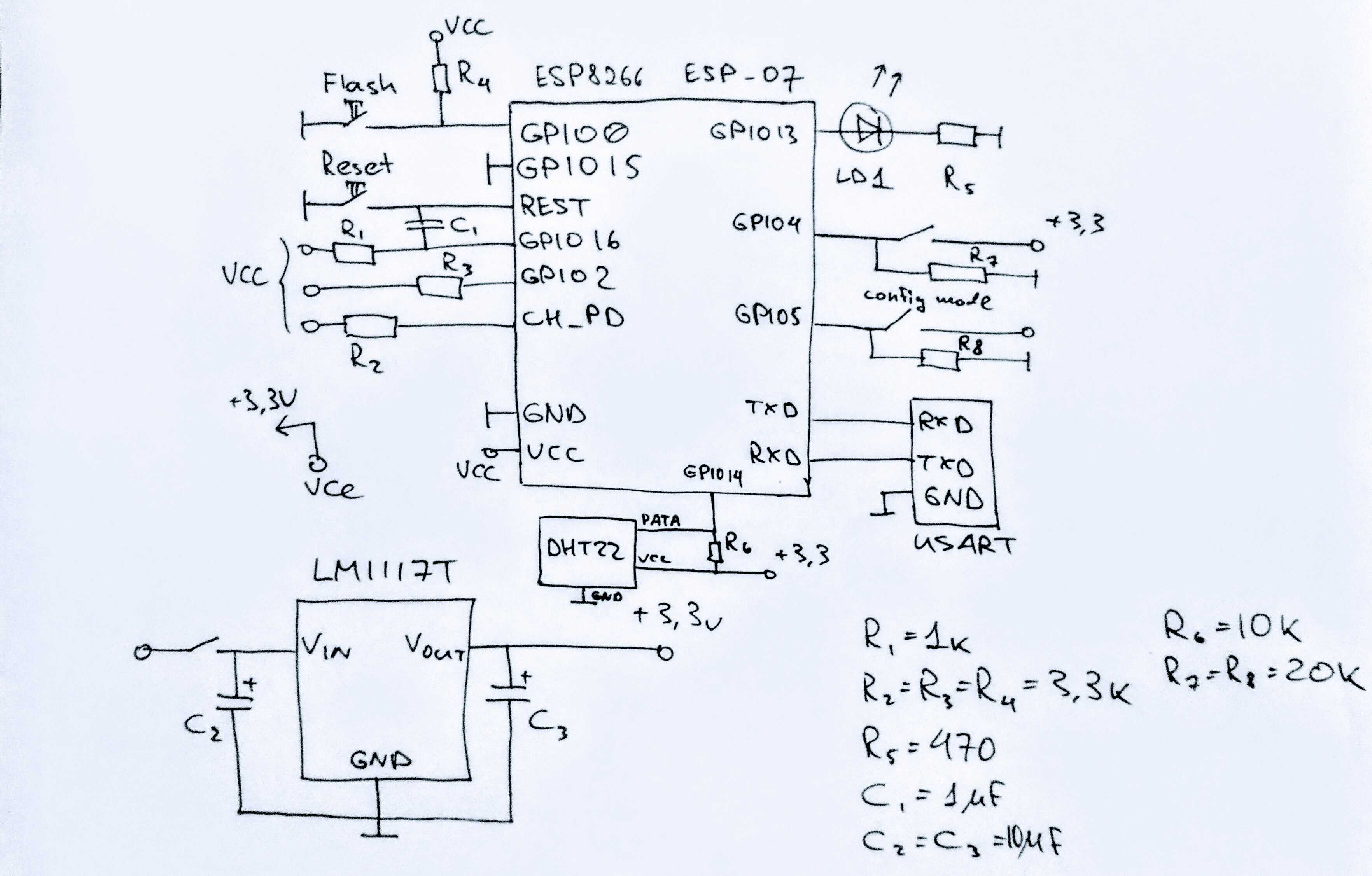 The circuit is similar to that one from my previous post. Here is what I added:

We use DHT22 sensor for measuring temperature and humidity. You can also use DHT11. That’s probably the most popular sensor for DIY projects, so MicroPython team kindly added a support for this sensor out-of-the-box. In case you have never seen this sensor, DHT22 looks like this: 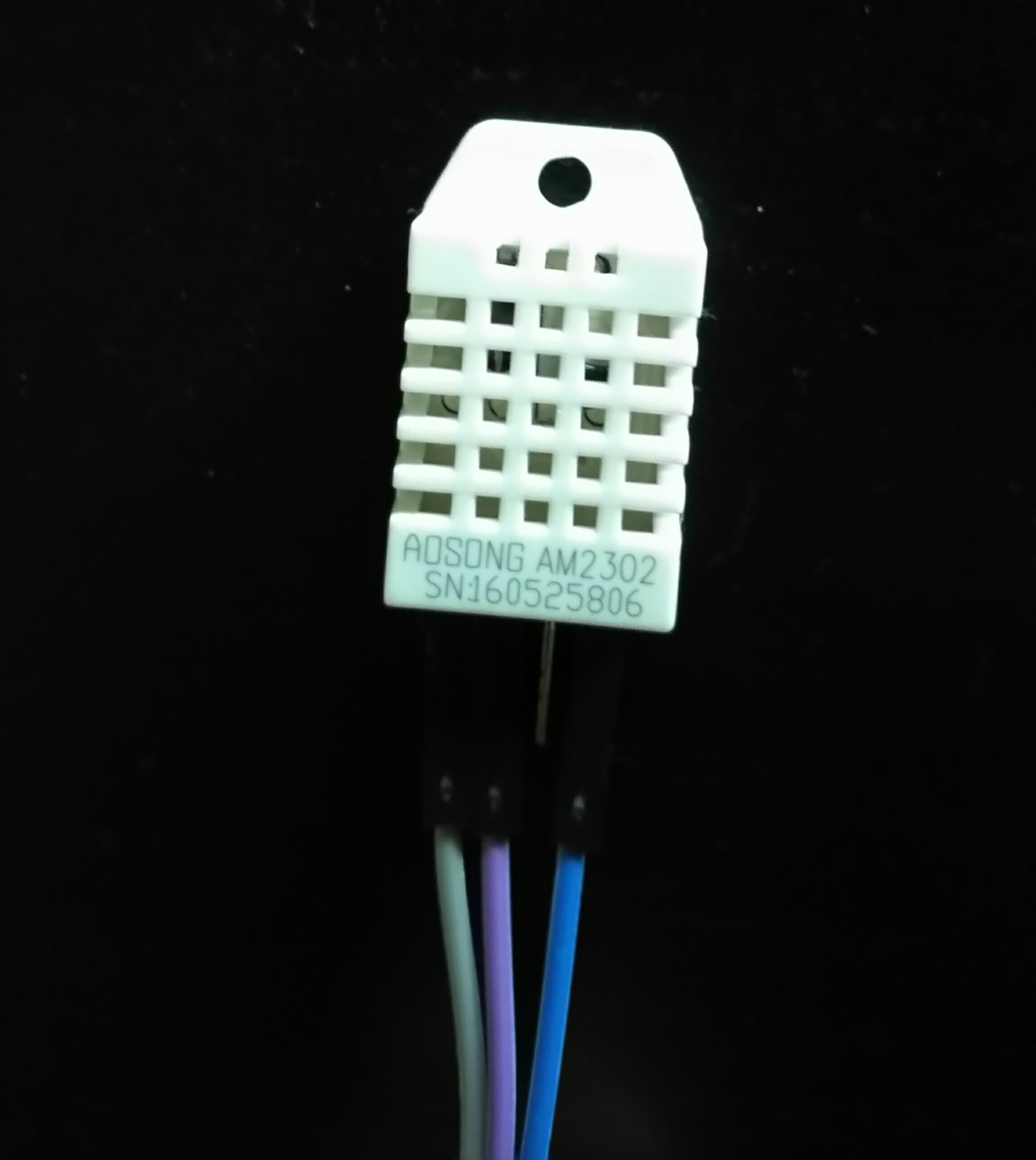 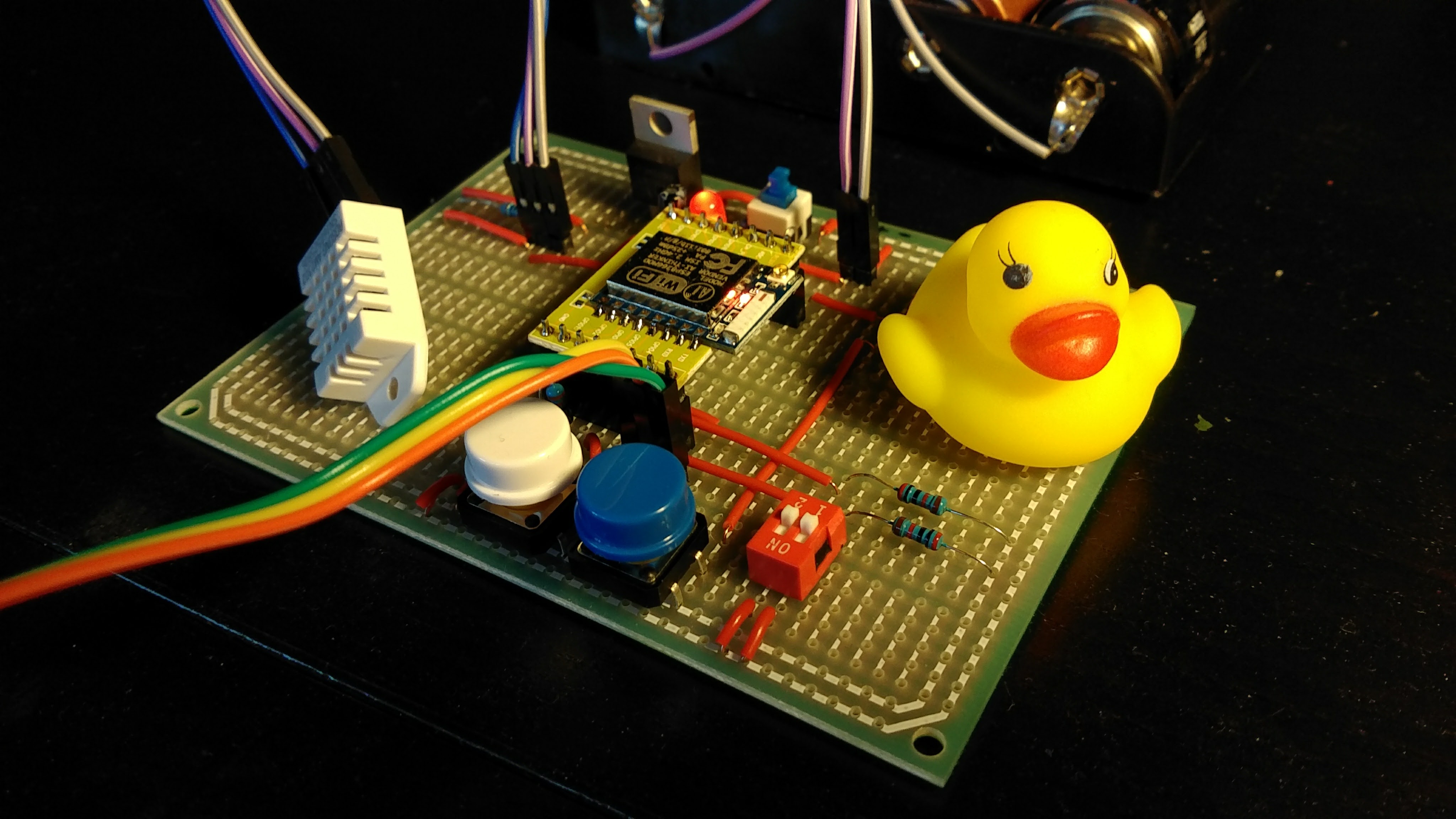 We’re done with hardware, let’s talk about software. I put sources to a repo on https://github.com/artem-smotrakov/yellow-duck

Since we’re going to send temperature and humidity to ThingSpeak, we need to connect our ESP8266 board to Wi-Fi. To do that, ESP8266 needs SSID and password. The most obvious way is to hardcode SSID and password. Here is how you can connect to Wi-Fi with MicroPython:

But it’s not convenient to have hardcoded Wi-Fi settings. If SSID/password change, we’ll need to change sources and upload it to the board again. Instead of hardcoding SSID/password, we can do the following:

So, if we want to use the device in another Wi-Fi network, or we just changed Wi-Fi password, we don’t need to flash the device again.

After the device successfully connected to Wi-Fi, it starts measuring temperature and humidity with specified interval. As I mentioned earlier, MicroPython supports both DHT11 and DHT22 sensors out-of-the-box. We just use dht.DHT22 function, see mesure_temperature_and_humidity:

That’s pretty simple. Then, we need to send data to the Internet. We’re going to use ThingSpeak which is a nice and free platform for gathering, analyzing, and visualizing data from IoT devices. ThingSpeak provides a RestFUL API for IoT devices. First, you need to create an account on ThingSpeak. Next, you’ll need to create a channel. After that, you’ll get an API key for posting data to your channel. This API key then should be used for sending data to ThingSpeak. Don’t forget to enable two fields in your channel: one for temperature, and another one for humidity. 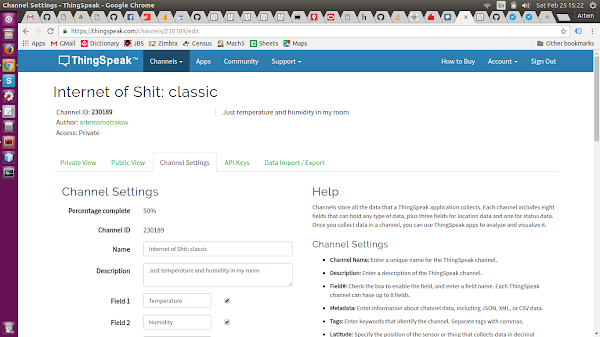 Here is how we send data to ThingSpeak:

We have the same problem here like we had with SSID/password - we need to provide API key, but we don’t want to hardcode it. The solution is the same - the device offers a user to specify API key in config mode.

As you might notice, we use TLS here - see ssl.wrap_socket call above which wraps a usual socket with an TLS socket. To be honest, I was surprised a bit when learned that MicroPython for ESP8266 supports TLS. But there is one thing about it. Even if TLS is used here, MicroPython for ESP8266 doesn’t support validation of server certificate (at least, v1.8.7 doesn’t support that). So, we’re relatively safe if an adversary can just eavesdrop the connection because all data will be encrypted. But if an adversary can modify the traffic, then we’re in a trouble because server certificate may be replaced with a malicious one, so that an adversary can decrypt and modify the data.

You might notice a number of print calls in the code. It’s just for debugging. You can connect to ESP8266 via USB-Serial adapter, and see those debug messages.

If everything went smoothly, the device will start sending data to ThingSpeak. Then, ThingSpeak allows you to visualize the data, and analyze it with MatLab. The simplest way is just to draw a chart like these ones:

These charts show temperature and humidity in my room. Here is a public channel for that: